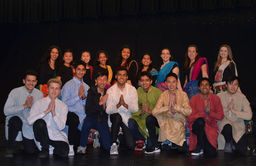 Oakwood celebrated the many cultures of its community through entertainment and food sampling at the biennual International Festival. The festival featured musical performances representative of Scottish, Indian, Ukranian, Japanese, Mexican, and Filipino heritage. Many numbers were led and choreographed by our talented students. Students wearing traditional garb paraded across the stage proudly showcasing cultures from around the world. The festival concluded with food sampling from many countries including India, England, Italy and Middle Eastern countries. This gave students the opportunity to try many new dishes.